A newer version of this tutorial can be found here: https://www.nextnano.com/manual/nextnanoplus_tutorials/1D/laser_diode.html

In this tutorial, we simulate optical emission of a 1D InGaAs multi-quantum well laser diode grown on InP substrate. The blue region is the separate confinement heterostructure (SCH), which forms an optical waveguide in the transverse direction to confine the emitted light (red arrow). The multi-quantum wells and SCH are clad by InP on both sides. A voltage bias is applied to the gray edges. 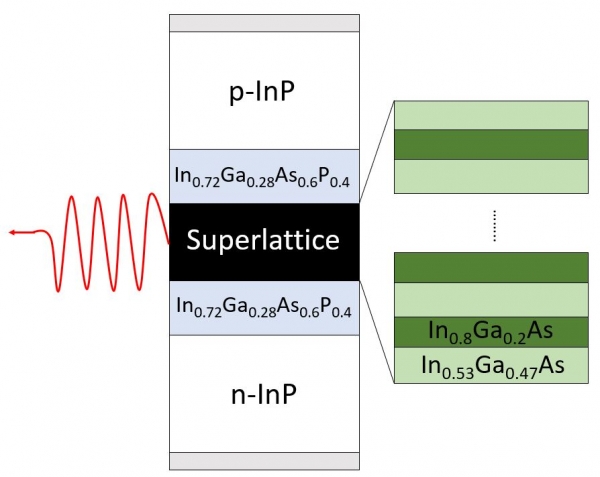 The corresponding input files are:

Recombination of carriers and emission spectrum

Each mechanism can be turned on and off in the input file.

Radiative recombination describes the recombination of electron-hole pairs at a position $\mathbf{x}$ by emitting a photon and is given by $$ R_{\mathrm{rad}}(\mathbf{x}) = C n(\mathbf{x}) p(\mathbf{x}), $$ where $C$ is a material dependent constant given in the database and has the unit of cm$^3$/s.

Since the radiative recombination process involves no phonons, this transition is vertical and therefore this contribution is only relevant for semiconductors with a direct band gap such as GaAs.

In the beginning of the input file, we define several variables for the structure and parameters for simulation. The variables are shown below. 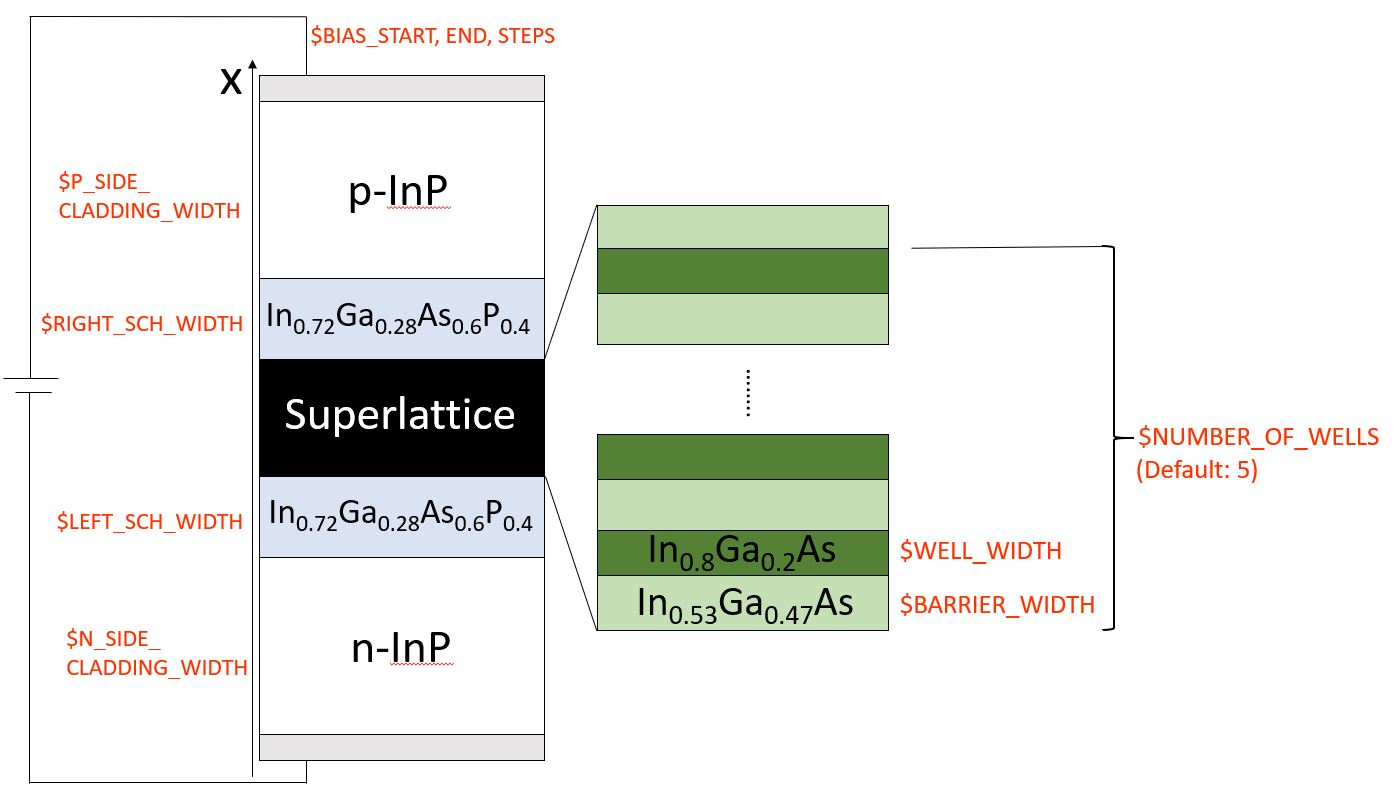 Figure 1: The definition of variables. The gray regions are contacts of 1nm thickness. $NUMBER_OF_WELLS determines the repetition of quantum wells. The program automatically sweeps the bias voltage starting from $BIAS_START until $BIAS_END, at intervals of $BIAS_STEPS.

Energy-dependent charge density and emission spectrum are calculated when the following is specified (see classical{} documentation for details):

The run{} flag specifies which equations to solve. This is the main difference between LaserDiode_*_qm_nnp.in and LaserDiode_*_cl_nnp.in.

In this case nextnano++ first solves the strain equation from the crystal orientation to decide the polarization charges (piezoelectric effect) and shifted bandedges. Then the program solves the coupled current-Poisson-Schroedinger equations in a self-consistent way (input file: LaserDiode_InGaAs_1D_qm_nnp.in). For the classical calculation (LaserDiode_InGaAs_1D_cl_nnp.in), solve_quantum{} and outer_iteration{} are commented out to restrict the calculation to the current-Poisson equations only.

The bandstructure and emission power spectrum of the system are stored in bandedges.dat. Figures 2 shows the case for the bias $0.2$ V. Here the quasi Fermi level of electrons is lower than the quantum wells. 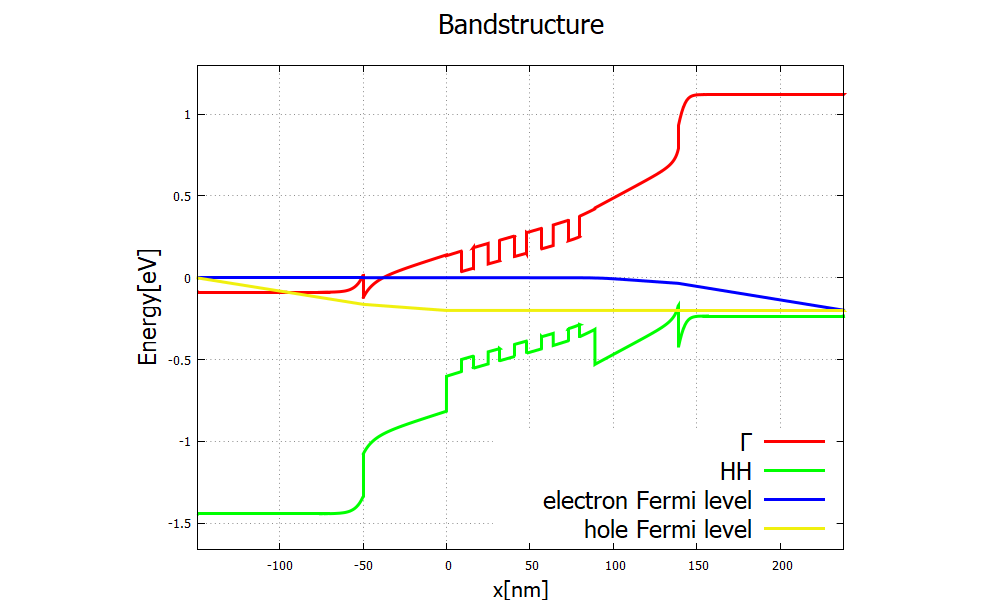 Figure 2: Bandstructure of the laser diode system for a low bias of $0.2$ V.

For the bias $0.8$ V (Figure 3), in contrast, it lies above the red line, allowing electrons to flow into the quantum wells. An electron trapped in the quantum wells is likely to recombine with a hole in the valence band, emitting a photon. In the input file \Optical\emission_photon_density.dat, one can see that the photons are emitted from this active region (not shown). Figure 8 shows the emission spectrum in this case. When the bias is too small, e.g. Figure 2, the intensity is much smaller, as can be seen in Figure 10. 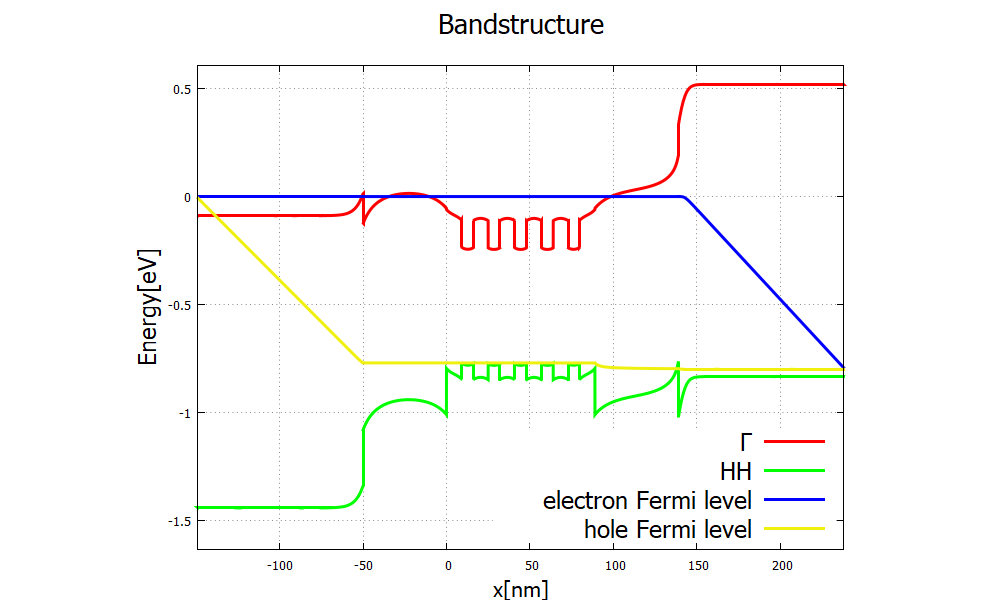 Figure 3: Bandstructure for a high bias $0.8$ V. Electrons flowing from the left and holes from the right recombine in the active zone (multi-quantum well structure).

In the input file LaserDiode_InGaAs_1D_qm_nnp.in, the single-band Schroedinger equation is coupled to the current-Poisson equation and solved self-consistently. The wave functions of electrons and holes along with eigenvalues are written in \Quantum\wf_probabilities_shift_quantum_region_Gamma_0000.dat and \Quantum\wf_probabilities_shift_quantum_region_HH_0000.dat (Figure 4 and 5). The light hole and split-off states are out of the quantum wells and not of our interest here. 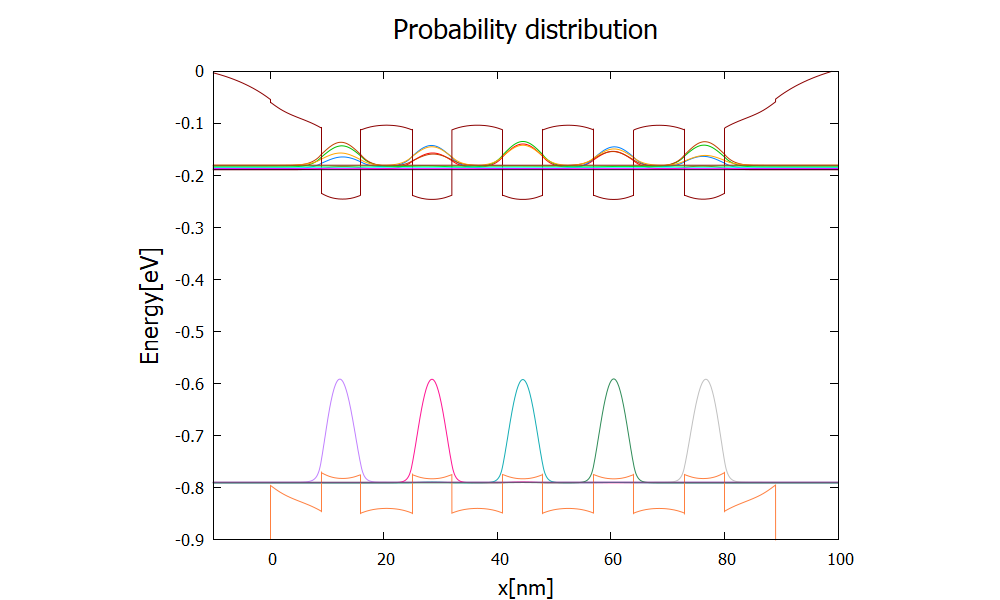 Figure 4: Probability distribution $|\psi(x)|^2$ of the lowest localized modes of electrons and holes for the bandstructure 3. Horizontal lines are the corresponding eigenenergies. 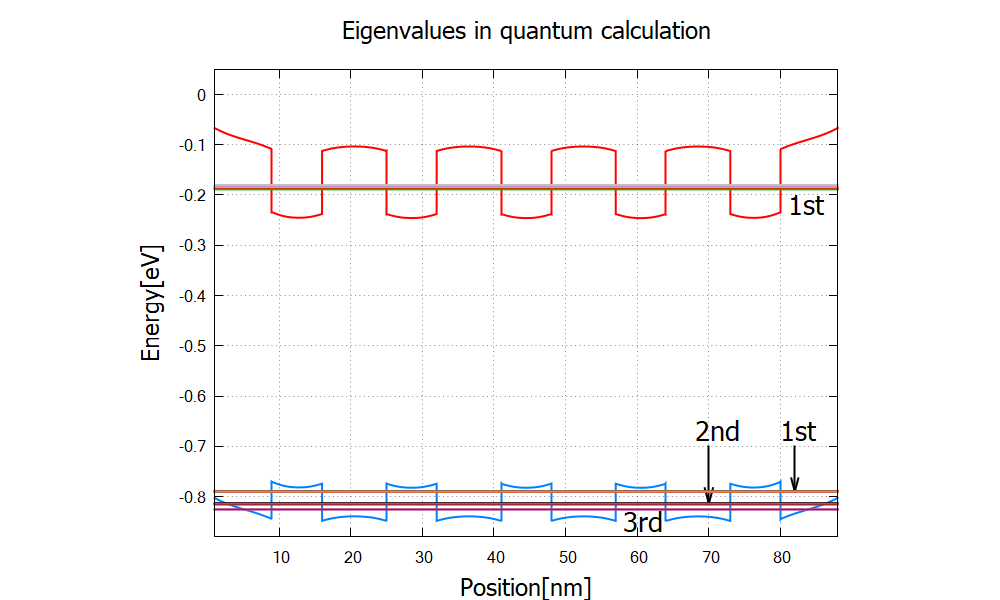 Figure 5: Eigenvalues of the Gamma-band and heavy-hole-band states in relation to bandedges. The Gamma band has single “miniband”, whereas the heavy-hole band has three.

The charge density with- and without quantum calculation shows different features due to the discretization of energy levels in quantum wells. In the output integrated_densities_vs_energy.dat we find the electron and hole densities as a function of energy (Figure 6 and 7). This quantity is integrated over the device and has the unit [cm$^{-2}$eV$^{-1}$]. We observe a good correspondence between the spectra and relevant energies of the present structure. 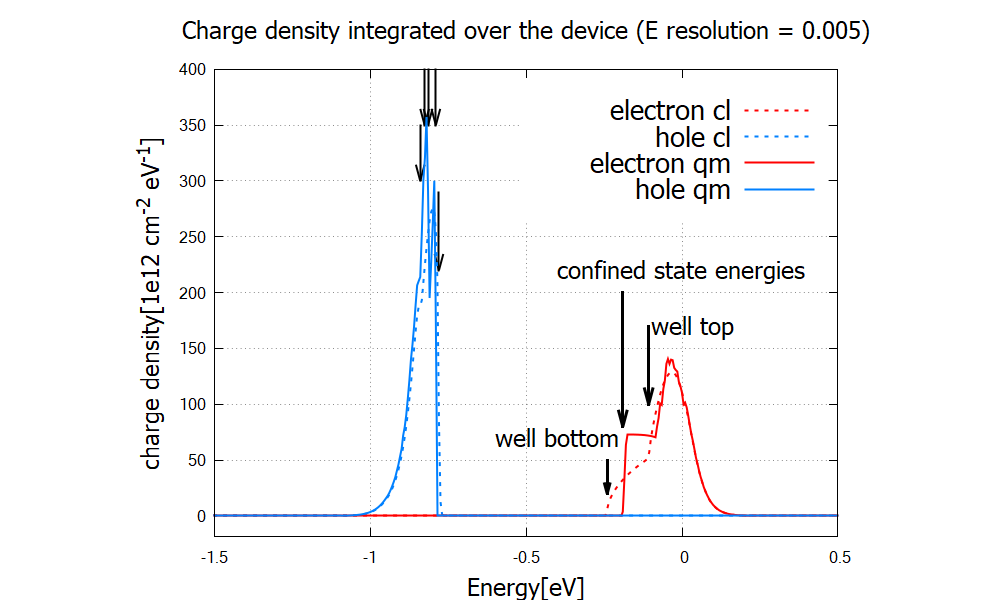 Figure 6: Electron (red) and hole (blue) densities integrated over the device as a function of energy. This figure illustrates the population inversion in stationary (quasi-equilibrium) state of the device under bias. Solid and dashed lines are for quantum and classical calculations, respectively. The black arrows mark the relevant energies of the structure 4 at bias of $0.8$ V. The hole density is shown in Figure 7 with higher resolution.

The hole density has been calculated with higher energy resolution in Figure 7. The ratchet-like shape within the wells results from the step-like density of states multiplied by (quasi) Fermi-Dirac distribution (cf. Figure 9.8 in [Chuang]). 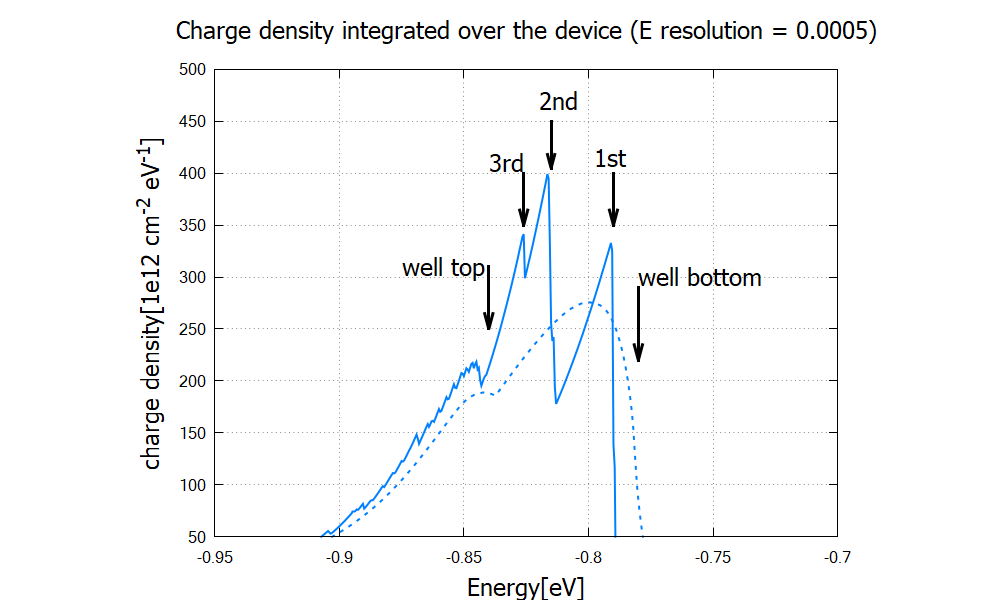 Figure 7: Hole density integrated over the device from classical (dashed) and quantum (solid) calculation. The energy resolution has been increased by a factor of 10 from Figure 6.

The spontaneous and stimulated emission spectra are written in \Optical\emission_spectrum_photons.dat and \Optical\stim_emission_spectrum_photons.dat, respectively (Figure 8). Please note that the stimulated emission calculation in nextnano++ assumes photon modes occupied by one photon each, i.e. takes into account neither energy-dependent photon density of states nor Bose-Einstein distribution. 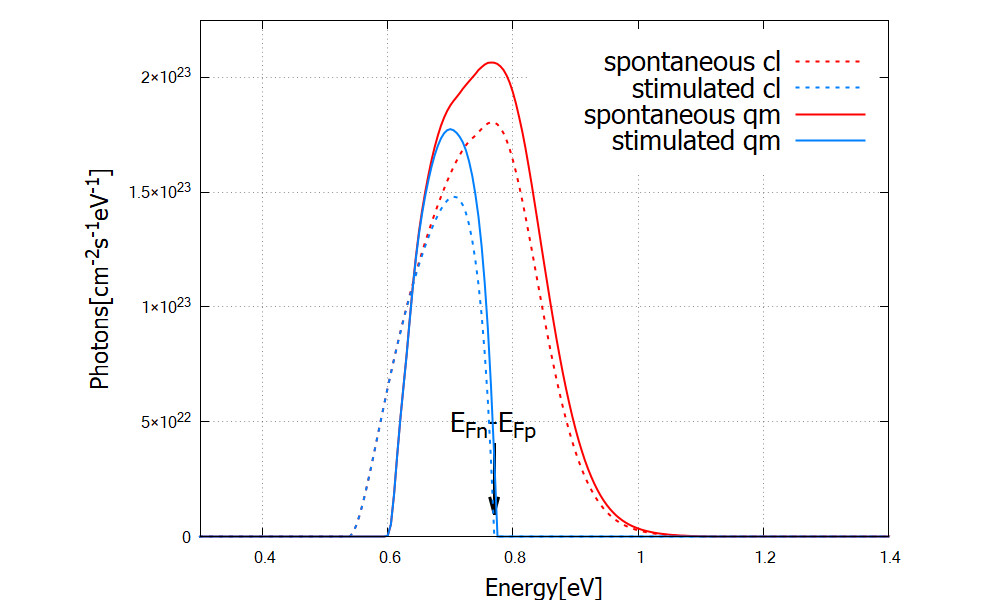 Figure 8: Emission spectrum of the laser diode for the bias $0.8$ V. The peak is at around 0.7-0.8eV, which is consistent with the charge distribution in Figure 6. The stimulated emission does not occur above the quasi Fermi level separation, $E_{Fn}-E_{Fp}$.

The absorption coefficient $\alpha(E)$ and gain (coefficient) $g(E)$ are essentially the same quantity with opposite signs, \begin{equation} \alpha(E)=-g(E). \end{equation} These are by definition independent of the initial photon population. Please note that the gain spectrum in nextnano++ is cut off where it is negative.. For details, see classical{} documentation.

The spectrum changes its sign at the energy $E_{Fn}-E_{Fp}$, that is, the separation of the quasi Fermi levels. According to the output bandedges.dat, this value is -0.0001-(-0.7702)=0.7701eV. The following result has been calculated classically. We also get qualitatively consistent results from quantum mechanical simulation. 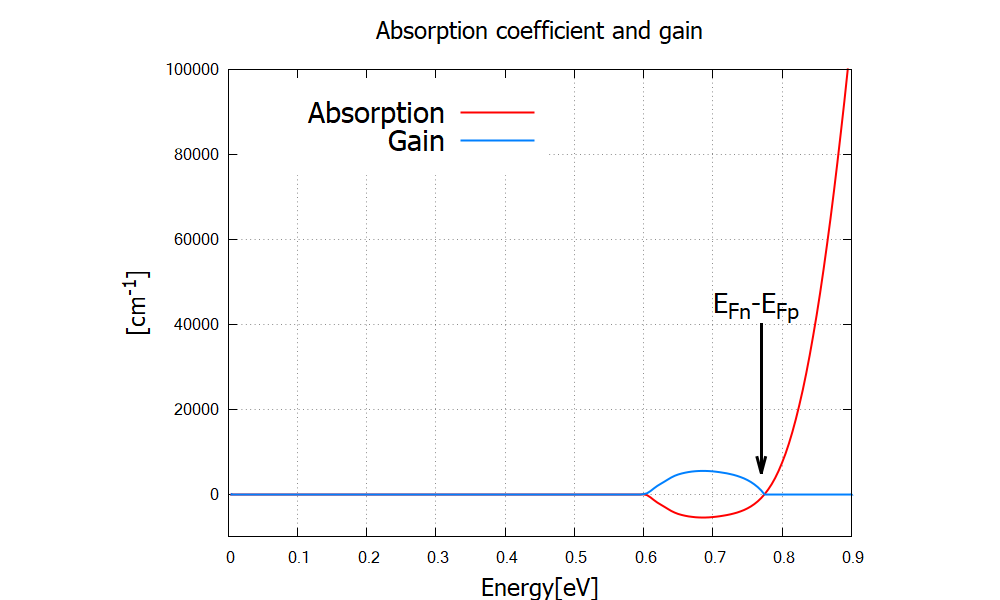 Figure 9: Classically calculated absorption coefficient and gain spectrum. The sign of the spectrum switches at the energy corresponding to the quasi Fermi-level separation in the active region. 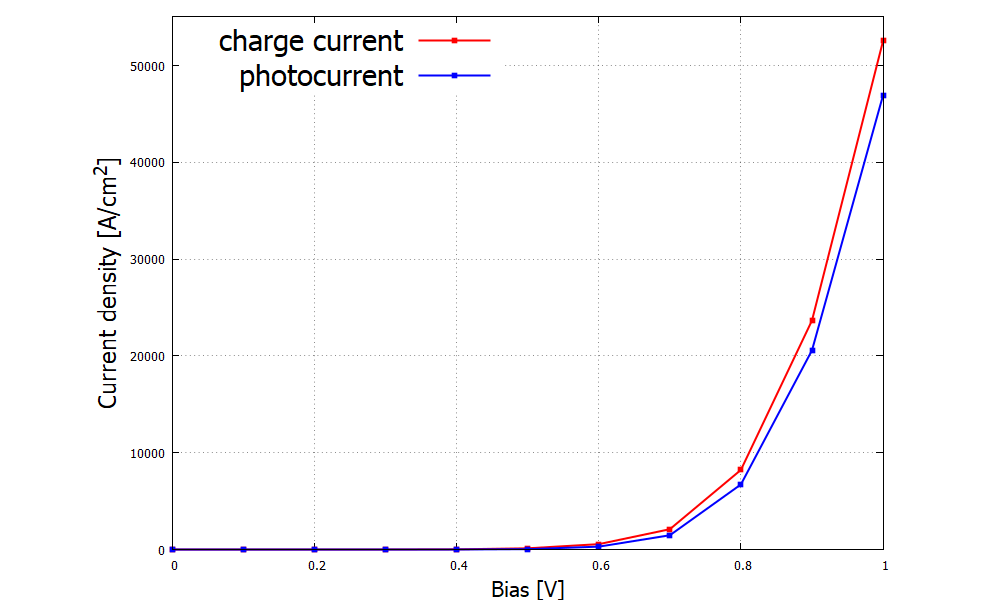 Figure 10: Charge current and photocurrent as a function of bias voltage (IV characteristics). This figure clearly shows the consequence of the difference in Figure 2 and 3.

The holes and electrons recombine in the multi-quantum well layers, emitting one photon per electron-hole pair. The efficiency of conversion from charge current into photocurrent is called the internal quantum efficiency $$ \eta = \frac{I_{\mathrm{photon}}}{I_{\mathrm{charge}}}. $$ This quantity is written in internal_quantum_efficiency.dat and shown in Figure 11. 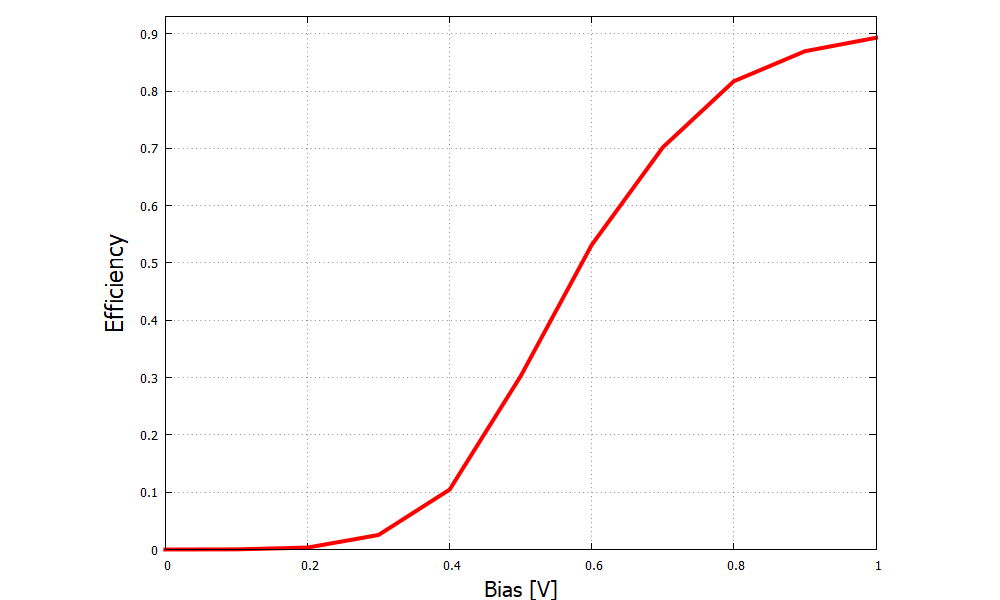